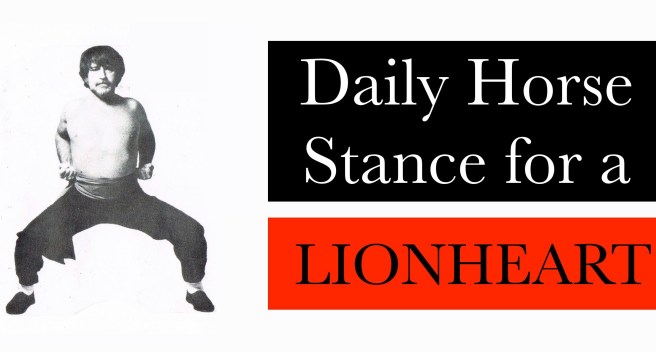 Geoff Pike, The Power of Ch’i

The greatest thing in Jackie Chan’s early martial movies are his training scenes. The Chinese really mastered the montage before Sylvester Stallone came along with his Rocky movies.

One of the key training moves that Jackie Chan performed was the Horse Stance. Jackie would perform it with bowls of tea on both of his knees and a fiery incense stick right underneath his bottom. Ouch.

The Horse Stance is a stalwart pose for many martial arts. It strengthens the legs as well as your base. It helps you develop a lower centre of gravity, a firmness and a stronger connection to the ground. It does not just strengthen the body, it also strengthens the mind. Bodily stability enhances mental stability. A person who can easily fall or be moved, can also have a less stable mind, lacking confidence or self-assurance and succumbing more easily to desires and emotions. This is why the Horse Stance is the most basic, yet most fundamental pose.

As regards health and overall bodily strength, I think the qigong teacher Geoff Pike gives a good introduction and promotion of the Horse Stance in his book – The Power of Ch’i. Geoff Pike was an author and Qigong teacher who survived cancer in his 40s and lived for another 40 years. I have written about him here and here.

Geoff Pike wrote in his book: “The Heart of a Lion cannot be carried on the legs of a chicken”. This quote reflects the importance of developing strong, firm legs to carry us dynamically through life.

Here is an extract from his book:

The Horse Stance is the rock upon which most Wu Shu-forms are built. it is the stance, which the old Masters had their pupils practice for up to three years before deciding if they were worth teaching further. When the Horse Stance is perfected, nothing and no-one can shift it… which is perhaps why it is also the basic fighting stance.

It is called the Horse Stance simply because the posture is that of riding an invisible horse. The feet are wide apart, the knees bent and the seat lowered into a non-existent saddle, whilst the hands grip imaginary reins in what is known as the Punch Posture.

Apart from its importance to balance, the Horse Stance begins to give immediate benefit to general health. It strengthens the legs evenly, developing reflex stability and making it less likely for you to trip, fall, be pushed or knocked down. It greatly improves circulation, aids digestion and ends constipation.

You will find that, no matter how athletic you are, the Horse Stance will tire you fairly quickly: your thigh muscles will ache and you will feel the urge to straighten up to relieve it. it is willpower to ignore this urge, to persevere a little longer (always within your own limits) that develops the stance.

The ultimate question in the Horse Stance is how low you can go. The lower the stance the better its effect, but this takes time. Don’t worry if at first you feel ‘tall in the saddle’ and don’t force yourself to too much strain too quickly. As your legs strengthen, you will find yourself lowering the stance easily and automatically.

Another and slightly more urgent question you will find yourself asking is “How long am I expected to hold this position?’ Again, this is a matter of individual effort. The answer is ‘As long as you can, with as much initial discomfort as you can stand without overdoing it.’ There is no yardstick but your own. It is just as well to remember that no progress is possible in any form of exercise without continued effort. Perhaps it’s worth mentioning that an advanced Wu Shu practitioner can hold the Horse Stance indefinitely and would think nothing of a half an hour without shifting.

If you can build up to, say, five minutes in the first few months, you will be doing very well. A clock with a second-hand will tell you how you are progressing. So long as you add a few seconds each day or even each week, you are making progress. It is better to begin with a higher but correct stance for longer periods than a lower, incorrect stance for short exhausting bouts.

When the stance is perfected, it forces Chi down to the lower abdomen and is distributed between the spread legs to the feet. It makes for perfect stability, ease of balance and a lightness of movement you will never have experienced in normal motion.

The Power of Ch’i, Geoff Pike

Can you adapt the Horse Stance for Qigong practice?

The Horse Stance is mostly utilised in martial arts. But I have experimented with using an adapted form of Horse Stance in my qigong practice when carrying out the basic Zhan Zhuang (Holding the Tree pose).

Typically the horse stance, which as the name describes, requires your legs to be positioned quite far apart, as though you are riding a horse with a relatively low pose, Your aim is to eventually be able to have your knees parallel to the ground or as close as possible. Though beginners will likely start off with a ‘high’ Horse Stance, until they have built enough strength and endurance in their legs.

However, the qigong Zhan Zuang (Holding the Tree) pose differs to this in that it is carried out with legs only about shoulder-width apart and knees slightly bent, dropping as low as around 5cm. Here Master Lam Kam Chuen demonstrates the standard pose:

Going a little lower and wider with the legs

However, I think some principles of the Horse Stance can be adapted in qigong. For example, you can have your feet a little more wider apart than your shoulders, and you can aim to sink lower.

As a person progresses in their qigong practice they can choose to adopt a lower, and hence more strenuous form of standing pose in order to strengthen their legs.  Indeed, years ago, my Qigong teacher Mr Kurihara, would sometimes direct me to go lower in my Zhang Zhuang pose (Holding the Tree) pose. When I went lower, I definitely found the pose a lot more challenging and my legs would tire. But I do believe it made my legs stronger.

At that point, I was practicing the Holding the Tree pose every day for around an hour, so I could go lower. But now, my qigong practice is more sporadic, and so I will only practice the standard qigong positions.

Perhaps, this adaptive aproach goes against standard qigong instruction. Although, perhaps there are some qigong teachers who do teach the standing qigong poses in a low way. Nonetheless, I don’t see why it cannot be used to enhance your practice by going lower when practicing the ‘Holding the Tree Pose’ in qigong sometimes. Just as long as doing so, is still relatively comfortable, does not cause pain and your knees do not come forward beyond your feet, then it may be ok to practice.

Whether you practice an adaptive form of the qigong ‘Holding the Tree Pose’ or the standard Horse Stance with legs wide apart, I think as with everything – regular practice – especially small amounts, is best. The Horse Stance can be a part of daily practice along with stretching, callisthenics, yoga or any other personalised daily practice.

I would recommend a daily practice of 5 to 10 minutes Horse Stance every day, either first thing in the morning or in the evening. It does not matter whether it is a high Horse Stance or a very low one. Either will benefit the legs and body.

If you are out of practice, out of shape, have any health conditions, are elderly or a beginner, adopt a very high horse stance. If you are fitter or have practiced for a long period of time, you can go lower into the horse stance. The lower you go, the harder the pose is.

However, don’t risk harm to yourself. Let go the ego that tells you ‘no pain, no gain’. Otherwise injury can occur. Build your ability, strength and endurance slowly. As you get used to doing the pose daily, you can start to go lower, or increase the duration of practice.

Or you could even try doing the Horse Stance with cups of hot tea on your knees and a burning incense right under your butt. Yay.

Disclaimer – The author of this blog is not liable for any burnt asses or scalded knee caps. Please consult your doctor if you are fool enough to attempt the Horse Stance with incense and hot tea. Who do you think you are – Jackie Chan?

This content includes referral or affiliated links to products or services. Visit my disclosure page for more information.